The team was founded in September 1965 while the Mountain Rescue Group was disbanding. It was initially established as a heavy urban search and rescue unit to assist with Civil Defense activities in case the Russians dropped a nuclear warhead in the vicinity. The team was trained in subjects like building reinforcement, welding, nuclear fallout measurement, riot control, fire fighting, auto extrication and first aid. Occasionally the local police would ask the team to assist in searching for a lost hiker or skier. Over time it was realized that there was more of a need for a wilderness search and rescue team, and not so much need for a Civil Defence unit. Soon, the team started to focus on, and train and equip for, search and rescue operations in the North Shore mountains.

The team once had a dive group, which performed underwater search and rescue operations. This function is now performed by the police. The current team focuses on Mountain Search and Rescue (SAR), Helicopter Rescue, Urban Search and Rescue, and public education.

WHERE WE ARE NOW

This current focus on team operations has been enhanced by several recent initiatives. NSR has led the way in this province for SAR teams in the development and implementation of Human External Transport System (HETS) also known as Human External Cargo (HEC), where specially trained members are slung underneath a helicopter by lengths of over 200 feet to access technical terrain in order to quickly evacuate stranded and or injured hikers, climbers, skiers, snowboarders, and snowshoers. NSR has acquired ATV and snow mobile capability in order to address increased call volume in specific response areas that require this type of transport. NSR has developed a comprehensive communication system capability utilizing 7 strategically located VHF radio repeater sites. This is vital due to the mountainous terrain on the North Shore, expanded hiking areas that have opened up and with the meteoric rise in mountain biking and the accidents that come with this extreme sport.

NSR with the assistance of private and municipal support has produced it own topographic maps for the North Shore that are specific for our team operations.

On average NSR responds to about 100 calls/year. However, recently the trend has increased – 2015 to 2017 NSR responded to over 130 calls each year. This means we are responding to almost 3 rescues/week, many lasting more than one day. In the shoulder seasons we see fewer rescues, while in the summer we quite often see 3-5 rescues in one weekend. Winter calls generally last longer and require more manpower due to lack of light, weather, mountain conditions and less air support due to weather and light.

Our latest stats are below. You will notice the upward trend until 2005, which is when the local Fire department took over calls involving mountain bikers. Our call volume dropped off a bit after we stopped responding to the majority of mountain bike calls. In recent years it has started to increase again with a dramatic increase in 2015, 2016. 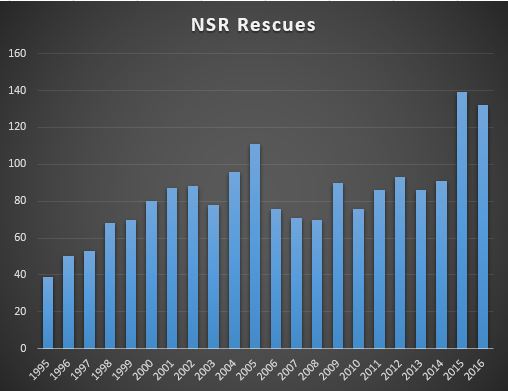